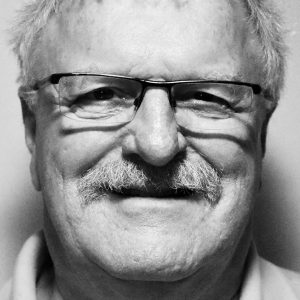 Born in Goldthorpe in Yorkshire, England, Derek ‘Mo’ Moore was heavily integrated into the busy Sheffield music scene by 1964. Leaving for France with the band Judd’s Mates and local star, guitarist George Gill, Mo chanced to meet Ron Howden – who he knew from Sheffield – at a club in Nancy, France. Ron immediately walked up to the band and asked to join. The drummers swapped bands that night, and the powerhouse rhythm combination of Ron and Mo was born. Together they have worked their way through music for over 55 years; they only have to look at each other and they are locked down.

They’ve performed around the world, including at the Panathinaikos stadium in Athens Greece, where they played for 60,000 people with the band Prophets. This gig was booked by Nico Papathanassiou, the brother of Vangelis, a close friend of Mo and Ron.

By the end of 1969, the guitarist for Prophecy left, so Mo sent a telegram to Roye Albrighton in Sweden, asking him to join the band. After their first gig, the name of the band was changed forever to Nektar.

Now Mo is back with the band, and the dynamic duo of Ron and Mo are driving Nektar to new heights on “The Other Side,” the band’s latest album.